Many often neglect or acknowledge potential internal inhibitors within themselves or their students that prevent the ability to utilize violence when and if needed.

These, even after many many years of training, can have a dramatic effect on one’s ability to implement needed physical skillsets under duress. Most of the time these are innate or time-conditioned and need to be addressed. Too many times I’ve seen martial artists who “failed” or froze in a self-defense scenario and blame their training on this calamity instead of looking at the real cause. Even instructors are forever telling their students such bullshit as “You need to put more hours in” or “This is a matter of training harder” or regurgitating statistics on Hick’s Law and the number of times repetitions need be made to condition something to reflexive use. If these inhibitors aren’t addressed, NONE of that matters as it will be overridden and manifest itself in the worst times of duress.

Some of these inhibitors we’ll address below. Granted, this is a glossing-over  and a general overview as in-depth issues are not within the scope of a short article.

Now, these are not always so easy to discover in students, moreso in one’s self with self-reflection and an honest assessment of where your own personality factors in here. To help with this, I often use the logical levels template to uncover certain internal restrictions. If there’s resistance, either seen or sensed, it will always fall on one of these platforms. The higher the resistance, the likely the higher on the pyramid and more work needed with which to overcome it. 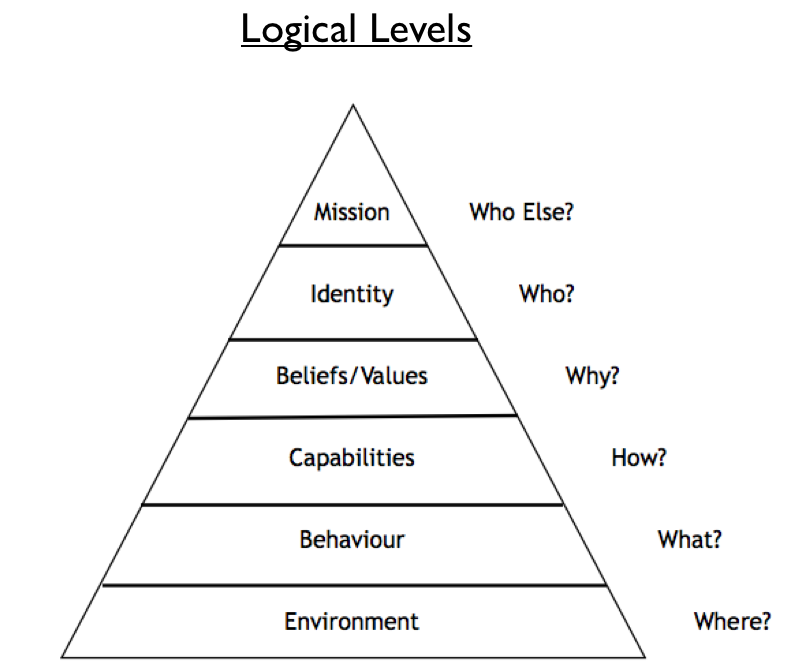 *There may be other inhibitors, admittedly, but these are the most frequent I tend to come across.