FLINCH RESPONSE(S): I’d like to leave this here as I’ve had the same belief for a long time. So many are stressing the importance of THE startle flinch response when, in fact, it should be made very clear that we have startle flinchES. There is no universal flinch response we all have to every given surprise stimulus, despite the claim of many self-defense experts. Do some people-watching. I’ve seen people scared from surprise heavily increase breathing while grabbing their heart. Getting burned by a hot stove causes an explosive pullback and often a grab of the burnt body part, but not raising the hands up in front of the face. Tripping and falling forward causes an outward/forward-moving and often double-locked arm extension but torso doesn’t retract back, for obvious reasons. (that falling thing) I’ve seen someone getting salt or sand in our eyes recoil back, not with an arm projection and body jerking back response, but with an “elbow shield” covering the eyes. Blinking without any other reaction at something light and non-damaging coming towards our face. (How does the brain distinguish?) Someone pulling your chair back at a party causes a flail or “spasm”, desperately looking for a way to regain balance. A great idea is learning to re-focus quickly on “the target” or cause of the initial surprise and at least training your brain (hitting one’s significant other from having a water fight is not recommended) to think of immediate counter-offense. 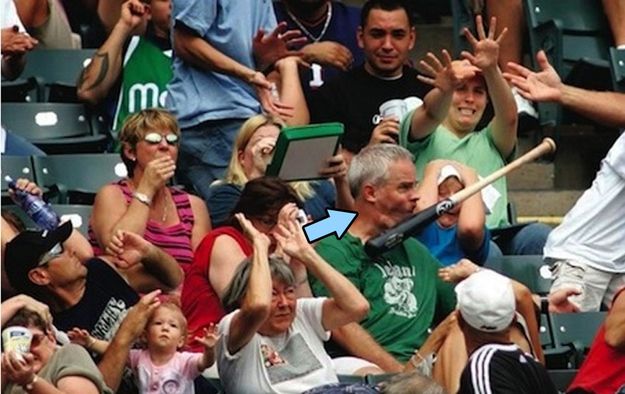