PART ONE: I’d like to talk about a topic that to me is even more important than physical strategies (as most of us are in our cars every day interacting with other human beings), only because we are far more apt to have conflict through this means daily: defensive driving and car safety. Aren’t they one in the same? Not at all. One, defensive driving, covers the actual movement of the car-traffic, reading the body language of other drivers, common sense with spatial awareness as it pertains to others, driving with a defensive mentality to ensure getting to a locale in one piece. I’m going to be discussing both in a two-part article.

Defensive driving.  While travelling at highway speeds, I recommend at least a full car length of distance (at least) between you and the car in front of you. This allows for enough reaction time to stop suddenly, if needed. Here in Costa Rica, I realize that this gives other drivers the lane over the idea that a car length is ample space for him to fit his Chrysler so be aware of that potential possibility as well. This distance both gives your reflexes enough time to react to rapidly-changing stimulus and is easier on the brakes of your vehicle if you’re somewhat lax in your vehicle maintenance. The last thing you need is to have brake failure because you’re constantly riding the brake/clutch.

Stopped? At least enough space on either side to drive around the car in front of you in case of road rage or a perceived sleight from the person ahead is always a smart idea. I know at least one friend who, at a stop light, stopped inches away from the vehicle ahead, which may or may not have been the trigger point for the following aggression of him getting out and trying to smash the driver’s side window in. On a side note, nobody said you had to get out of the car if another driver shows signs of road rage (giving the finger, shaking a fist, swearing after rolling down a window, getting out of his/her car). The best thing to do, although for us men it often tends to challenge our “pride” is to stay moving in your vehicle while calling law enforcement or 911. As a tactic you can even, if followed, lead them directly to the station after alerting them you’re coming. (Let someone else do the work for you who’s paid to deal with that sort of engagement) Maybe not macho, but prudent and sometimes even pretending to be on your cellphone will scare off someone inclined to escalating a scenario. Plus, you never know when someone’s packing a pistol. 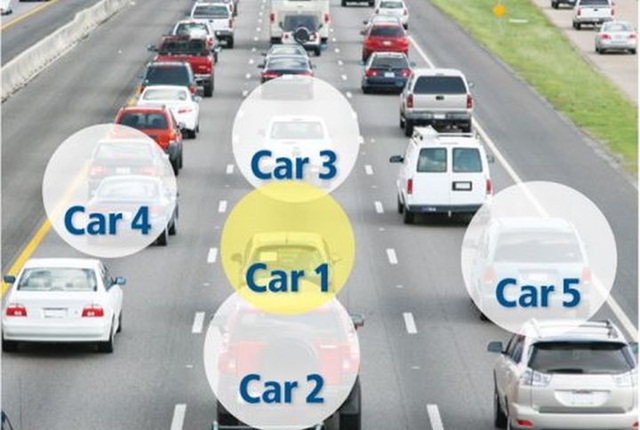 Constantly checking your rearview mirror for both knowledge of the coming actions of drivers behind you and, if your intuition dictates, paying attention to potential vehicles following you for long periods of time. Lock your doors while travelling in urban areas. Too many times I hear of the same story-“I was waiting at a red light and some guy out of nowhere jumps in my car and orders me to drive him to such-and-such location.” (One true story in Canada even involved one of these guys putting a needle to the driver’s neck claiming he had AIDS-infected blood in the syringe, which really gets one’s attention, needless to say) Always use your peripheral vision. I see so many drivers with tunnel vision that never pay attention to anything other than what’s directly in front of them. That’s strong awareness but unfortunately only strong to 25% of the directional potential problems. (And eliminates any possibility of being aware of a potential motorcyclist coming up from the side and seeing that purse or camera sitting innocently on the passenger seat waiting to be taken after a quickly smashed window) While this article discusses only a fraction of the potential elements of safe driving, it gives a glimpse of some simple task that can be done to contribute to avoiding potential danger. We’ll discuss car safety in our next installment. Until then, stay safe.