Improvised weapons are often an add-on to most self-defense or martial arts curricula. They’re paid lip service to but rarely delved into outside of that “bonus” territory. As gun and knife laws continue to be put under the microscope and restricted with greater frequency in many societies, this is an area of study that should more-and-more become an integral part of one’s combatives training.

I’ve heard many complain that there are only so many ways to implement this into a class environment but, inevitably, it’s limited to the instructors’ creativitiy. In my estimation, as many skillsets that promote adaptability, behavioral flexibility and mental acuity the more prepared you’ll make that student for the realities of real violence. I break down weapon usage in terms of categories: bladed/cutting, penetrating, impact, flexible, projectile, shielding and combinations thereof. Some can utilize leverage and reinforce breaks/hyperextensions or chokes. 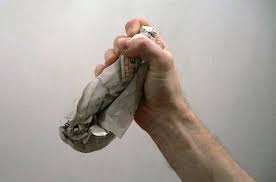 Here are some that I advocate and utilized with my student base and security personnel:

We, as humans, are and have always been toolusers but, ironically, the self-defense world is one of the only industries where this area has “devolved.” We believe that counter-knife is best served against empty-hand because of some moral code. (religious, moral, ethical, social restrictions – but our life should be taken with the same moral highground, we only have one, after all) Multiple attackers can be beaten with trained empty-hand systems. Utilizing weapons because it’s unfair or unjust. It’s become bass-ackwards. I see self-defense experts getting out of their car in a road rage incident to teach the other a lesson on who they’re screwing with, when the greatest weapon that we utilize on a daily basis is the very bloody car we’re in at the time. Going outside when a potential burglar is on the roof (territoriality) when our best tactical advantage is staying inside the very area we know better than anyone on the planet…our home – which is filled with improvised weapons, tools and household items.

Regarding even general weapons use, so many go and purchase the latest cool-looking, cutting-edge, carbon-fiber (and expensive) weapon, which is fine. (This does not have to be super cost-prohibitive). I always say that my LED flashlight is tactical not because it’s black but because I use it tactically if need be. Combative names for knife models, labelled tactical, blades that can’t be used for utilitarian purposes. Remember, if you can’t throw it away in a pinch because it brings some loyalty from you, there’s some personal investment or it’s too expensive…it shouldn’t be carried in your EDC kit. When I lived in Canada, I’d tell students that the two places I did most of my self-defence shopping were Canadian Tire and Home Hardware, not the local armory. Being innocuous is a huge advantage when being processed legally after having to defend oneself lethally, for whatever reason.