I was asked a short time ago is esgrima criolla was a “martial art.” I have found myself thinking on this for some time and debating the answer. Jorge may have some different or complementary views on this but I’ll share my perspective. Esgrima Criolla is inevitably the knife fighting method for the gauchos of old…Argentina, Chile, Brazil, Uruguay and a number of other places. The lifestyle was hard and born out of need. Many disputes were settled with the blade, as is historically documented, some of which is on this page. The most accurate comparison I can make is the samurai. They didn’t simply practice a martial art of the sword. One size does not fit all so they adapted what was necessary and applicable to them as their life depended on it. It was not the traditional kenjutsu we see practiced now. Even the perpetual Musashi example is a contradiction. The Japanese are often very structured in their martial syllabi and small minutiae are of the utmost importance. Yet Musashi himself, once an outcast and hated in his own society and the antithesis of what a traditional samurai represented, stated that his “style” was inevitably a no-style. What worked. A compliation of tactics and functionality that was sewn together under the pressure of survival and not a penny less. 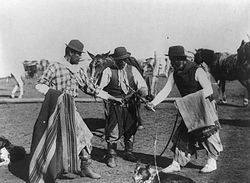 Though it will inevitably be lumped into the current martial landscape as a comparative “art”, I dispute this in some ways and in others I hope it never achieves that standard. It was born of a need, not a systemized approach to learning “knife fighting” for the masses with drills and sequences and stoic responses for hypothetical problems. The individual who utilized it learned through trial-and-error, under pressure and if it didn’t work, he (quite simply) lost his life. Quite a high cost. Ugly and without care to “technique” or the weight of how things are supposed to be done from opinion and experience other than their own. Upon the current re-creation and re-connection (whether it be esgrima criolla, esgrima tumbera from South American prisons or esgrima malevo), it took me a long time (due to my previous experience and reference points blinding me) to see the vision of what this was and where it fit in, why practicing “self-defense” against the knife or through a technical knife system was a moot point, why micro-specific striking points simply don’t work when pressure is factored in, why empty-hand counter-knife is simply not as prevalent a skill to develop as equaling and multiplying the level of force needed or conditioning a specific escape response. It’s an experiment in functionality. Granted, there are techniques, terms and methods, types of specific contextual sparring, and labels for distancing, footwork, grips and positions. But this is all done with an experimental eye – does it work with a fully-resisting opponent in front of you trying to cut you? If not, it rapidly gets thrown away. We fight. That’s the end result of how we determine what works for us or not. Pressure-testing. Does it hold up? If not, it’s gone. It’s not tested under micro-scenarios to make the scenario fit the technique. Quite the opposite: if the technique doesn’t hold up under the scrutiny of resistant scenario, it’s invalid and discarded.

It is a dueling method and, because of this, many people state that it needs other components. That it doesn’t address modern need for the surprise or ambush knife attack, that there’s no “self-defense” methodology to it. I had thought the same at one point until delving further down the rabbit hole. It is entirely because of this that it gives an entirely honest perspective on the state of modern knife combatives and the modern knife attack. There is no room for the hypothetical, you just do. Experiment. And find. Then we come to conclusions that meet in the middle of truth….counter-knife is often a myth when one factors in multiple intent-filled stabbings, ambushes, modern knifer methods and the features of the modern knife. There is no sure solution. Blood, pain, shock and motive are the cold, hard reality of the knife attack. EC eliminates the theory and takes a cold hard look at what really works and what doesn’t, as was one by its ancestors.

EC is not deeply codified at this moment, is not overly structured and does not go the colored belt or ritualized canon route and this is one of the reasons for its base functionality-and why I gravitated to it. It’s simple, basic and pragmatic. A means to an end. I have no claim to the gaucho or Creole way of life, I’m not Latino and I don’t pretend to be (being a white guy from Canada). It’s not my culture nor my heritage. But I do know pragmatism and function when I see it after 25 years in this business. And, being entrusted with being the English-speaking representative of the beast, my goal is to promote it as such and maintain it via this manner as the English-speaking conduit for the system. It may not (nor may never) hit the masses but it will remain pure and unadulterated. And maybe this is its place, inevitably non-mainstream due to the fact of that cold pragmatism, the types of weapons contained within it, its history, its relative simplicity to learn (without 5-year program to draw out the learning) and its unapologetic matter-of-factness.

It was born not in the current day as the vast number of martial arts you see today (counter to the constant misrepresentation of their origins, most are recently modern, post WWII). It was born in another era where artistic merit was overruled by martial necessity. While kenjutsu has become an avenue of perfection and specificity with minimal or no actual pressure-testing, I hope the same does not happen with EC. From my part, it will not. I have no claim to the gaucho or Creole way of life, I’m not Latino, being a white guy from Canada. I am of the opinion that as a method it serves much greater purpose being low-key, in its original format and without the need to adhere to public opinion. I, in a way, and for what it’s worth, hope it never becomes a “martial art” in the manner that the vast majority of modern and traditional martial arts have. Just this man’s perspective, accepted or rejected.