The art of the gaucho, a simple but hard and proud men, the Latino equivalent of the Wild West cowboys where reputation was everything, living off the land was an accepted part of living and being an outlaw and afoul of the law was a distinct possibility. These were rebels; individualistic and independent from the government, law and political affiliation. Outsiders. Creoles, specifically, are always associated with being from mixed race; local or aboriginal peoples mixed with what is often European heritage. The U.S., Africa, the Philippines, Brazil, Chile, the Caribbean and, of course, Argentina all lay claim to Creole peoples. So how does something from another era pertain to modern day blade usage and personal defense? Let’s go over a few points of interest for those uninitiated and unfamiliar with Esgrima Criolla, and those who speak predominantly English and aren’t privy to the main areas where it’s practiced: 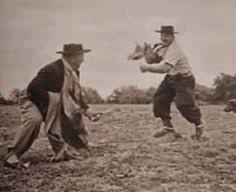 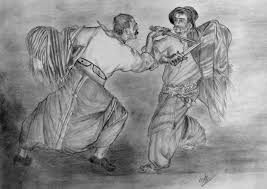 7.  They focus some attention on grips, deployment and concealment & carry – the fastest way to deploy a blade when needed and the carry stressed this (examples: facon carried blade down at the back of the belt for more rapid draw, the caronero hidden in a subtle pouch while on horseback (same can be done in the modern-day car)

8. It was inevitably big-knife fighting as most of the blades (outside of the verijero & picazo) started at 6 inches and made their way up to almost 4 feet (caronero). The punal was a South American version of the American Bowie knife. This length and size also allowed for blade-on-blade re-directions, flat-of-the-blade and spine usage and beat attacks (using the weighted flat of the blade as an impact weapon)

9. There is nothing complex about it, it is easy to learn. It was simple, functional and pragmatic…more a way of life than a “style of fighting” or “system” with adherent protocols, which was the beauty of the effectiveness. These people lived the blade, utilized it daily, carried numerous for different and specific purposes; it was a part of their existence, which conditions and hardwires the brain in a much different way than training complexity for an hour a week.

10. No politics, no belts, no arrogance. This is not a system as much as a method: what didn’t work was simply discarded as it had to be functional to keep someone alive. The effectiveness is in the trial-and-error and a mutual understanding and cultivating of knowledge. While it is an ongoing historical study, it is a study with direct implications to what modern reality dictates. It will not go the direction of larping, re-enactments and fairs. It is meant for function.

11. Dueling was a foregone conclusion if delving into this way of living. It was almost a right-of-passage so, while this is not accepted in modern society, it puts the impetus back squarely in the hands of the practitioner: you become practical and survive or you don’t, quite simply. No reliance on others, no soft training, no theory – you learned what worked under duress, through trial-and-error and put it into play in real-time…or you ceased existing.

12. Greater attention to the point. As many modern knife combat systems, Esgrima Criolla comes from Spanish influence. As with much of European/Spanish fencing, greater attention is placed on thrusting and becoming proficient at putting the point into the target.

For further information on Creole fencing/Esgrima Criolla, contact Jorge Emilio Prina (whose blog address is below) or myself.